Kokkare Bellur - A day with birds 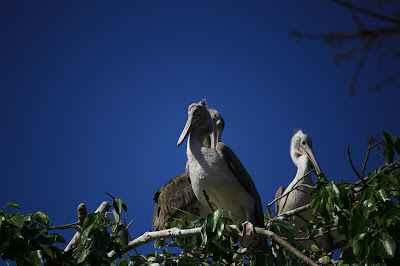 
Kokkare Bellur is a small village in Mandya district, the village is at a distance of around 90 kms. from Bangalore.

This place is a home to a number of migratory birds, mainly Pelicans   and Storks.. 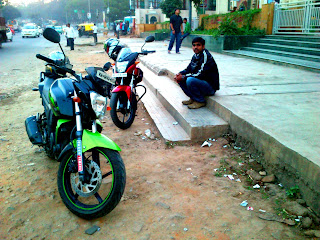 
The trip to Kokkare Bellur was a long awaited one, mainly because of my interest in photographing birds and the fact that kokkare bellur was amongst the must visit places for bird lovers from Bangalore. My friends Prashanth and Vinod joined me for the trip. We met up on Sunday (03-03-13) morning at around 6.30 am near Rajarajeshwari nagar arch and left from there. 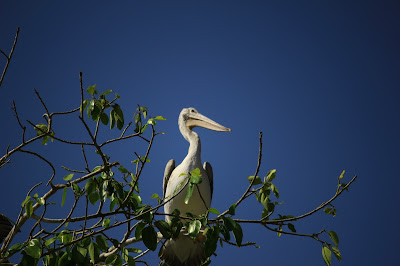 It was the month of March and a beautiful sunny morning with moderate temperatures welcomed us. We rode through the various cities on Mysore Road and halted at Hotel Vaishali in Channapatna for breakfast at around 8.00 am.

The Deviation: Very Easy to Miss !


After we were done with our breakfast, we continued on Mysore Road for about 10 kms and took a left onto Rudrakshipur- Halaguru road.

The deviation is very easy to miss although there is a sign board as it is covered with posters and banners. We managed to see a portion of the sign board which showed a bird. Kokkare Bellur is at a distance of another 12 kms. from the deviation.


A stretch of lush green fields follows the deviation for about 2 kms. There is also a lake that one would come across during this stretch. 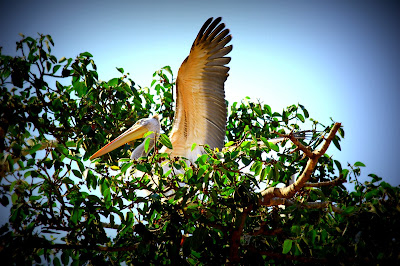 The road on this stretch was a good one. We reached the Kokkare Bellur at around 9.00 am in the morning. We were a little surprised to find the most rare and beautiful migratory birds nested within the limits of the village that we thought was not very big in size. The places before and after the village had no birds.

A tree by the side of the road had Pelicans. A small boy showed us the Pelicans and told that those were the young ones and were still learning to fly. He told us that we could also find a number of birds catching fish at a dam which was about 8 kms. from the village.

The accident: The villagers test your driving skills with lots of straws on road..

After taking some snaps of the Pelicans, we decided to head to the dam and check out the birds there. We thanked the kid and gave him about Rs. 20. We rode a little further when Vinod met with an accident. His bike slipped over straw that was spread over the road by the farmers.

We took him to a Govt. Hospital which was about 2 kms. from the village and had him treated. We decided to drop our plan of visiting the dam and returned to the village. It was about 11:00 am when we reached the village. 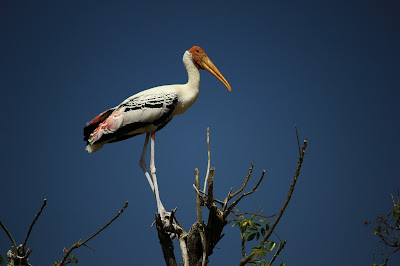 Return to village: Back on track..clicking !


Took us a while to get back into the grove...and realized we had missed photographing the Painted Storks earlier, so was eager to check them out through my viewfinder... It dint take us a lot of time to find the storks who where nested on the trees by the main road. 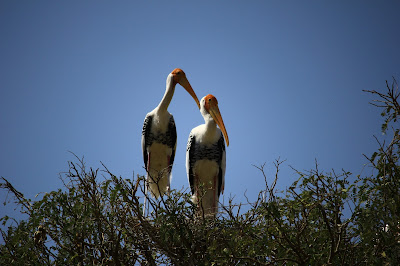 We then realized that there were a lot more of them on the trees towards the village and hence we proceeded further to get a better glimpse at them. 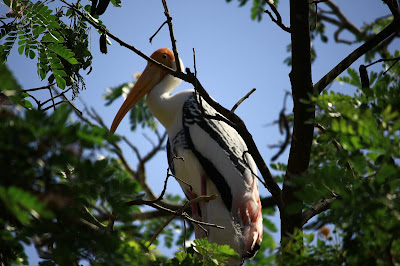 As we were photographing the birds, two kids took us to show some more hideouts of the birds.

The memories of the accident started haunting Vinod further when an old lady started telling him about an accident that had happened few days back that had led to the death of a person. He seemed pretty pissed off about that.


It was around 11:30 am when we decided to leave the place. When we were leaving, the kids asked us if we had pens with us. Prashanth offered money instead, but they seemed pretty keen about a pen or a notebook.   I found a pen in my bag and gave it to one of them. Prashanth gave another pen to the other kid. Remember to keep some pens or goodies when travelling here. May come handy in such cases.

On the way back


While returning, we decided to spend some time near a lake and the lush green fields near that. We parked our bikes by the shade and sat by the side of the lake. There were a many cranes around the lake which got us back into the clicking mode.

Prashanth was busy taking some macro photos. We stayed there for nearly an hour chatting and having some snacks that Vinod had brought. Note that there are no restaurants here. One would have to get to Maddur to find a restaurant.


After the lake, we decided to venture into the lush green paddy fields on the other side of the road. We kept loitering there for around half an hour and then decided head back to Bangalore.

On the way back, we halted at Shivalli restaurant near Channapatna for lunch. We returned to Bangalore by around 4.30 pm in the evening

This chart approximately shows the bird activity at Kokkare Bellur during the various months of a year. One can refer this to plan their visit. 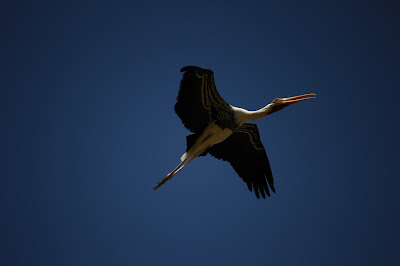 When to go: November to July (Pls. see the season and birds migratory chart before planning your visit)

Popular posts from this blog 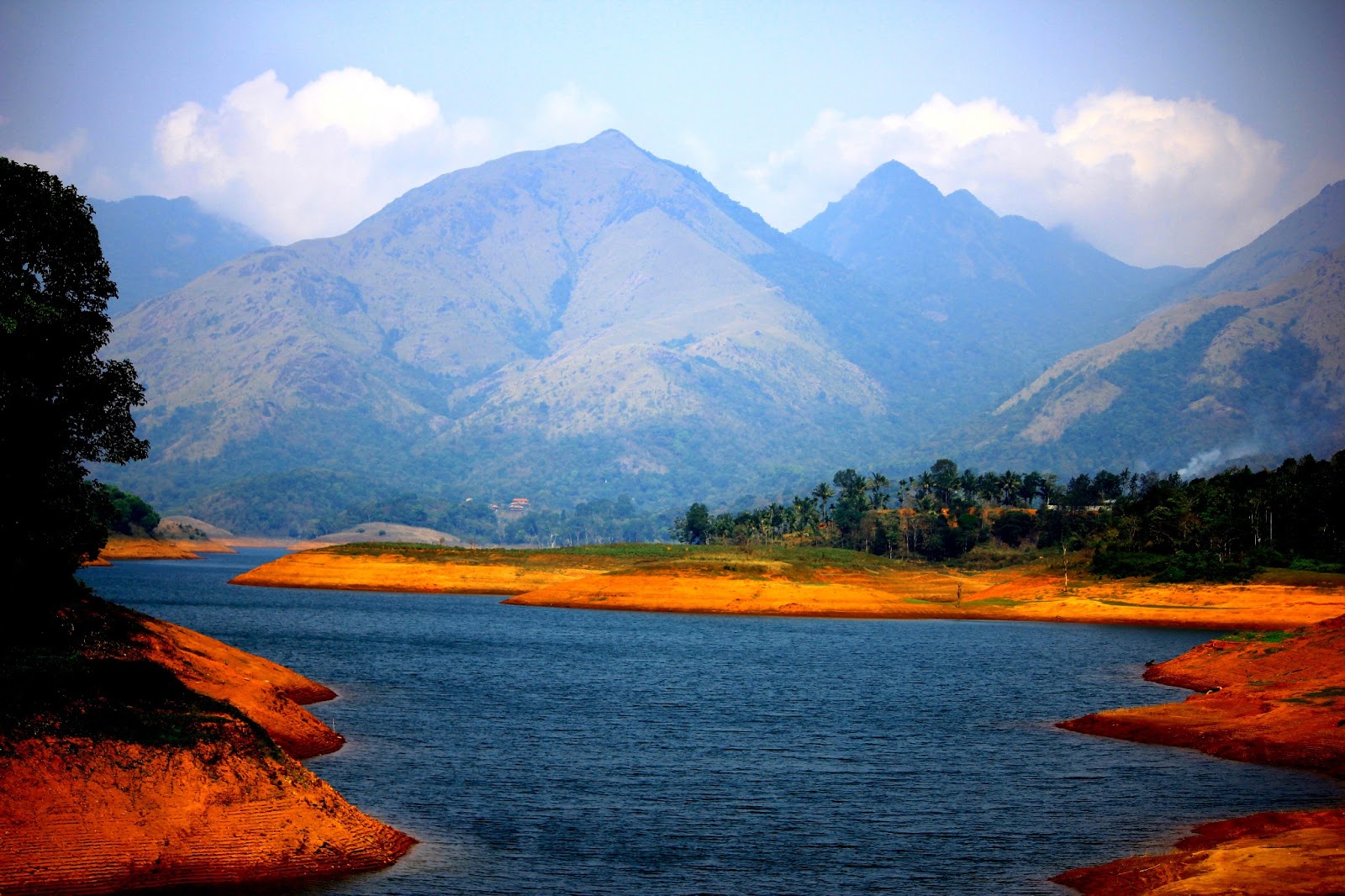 ﻿ The Place: Wayanad is a hill station in Kerala, located at a distance of about 280 kms. from Bangalore. The place is famous for scenic beauty and pleasant weather. When to visit: The best time to visit this place is during the months of winter. It is hot and humid during summer months. Monsoons are severe in these regions and hence it would be difficult to see places even though the scenic beauty is at its peak during these months. Starting off.. We were to leave to Wayanad from Guru's place on friday night. However the start was a delayed one because Ravi and myself were late to leave the office. We were later informed that we would be leaving from Vikas' place. It was night 12'O clock by the time we left.Vikas' place. After having left from Vikas' place, we picked up Vinod from his place and continued the journey. Taking a break at Nagarahole checkpost: We drove through Mysore road, and reached the Nagarahole ch
Read more 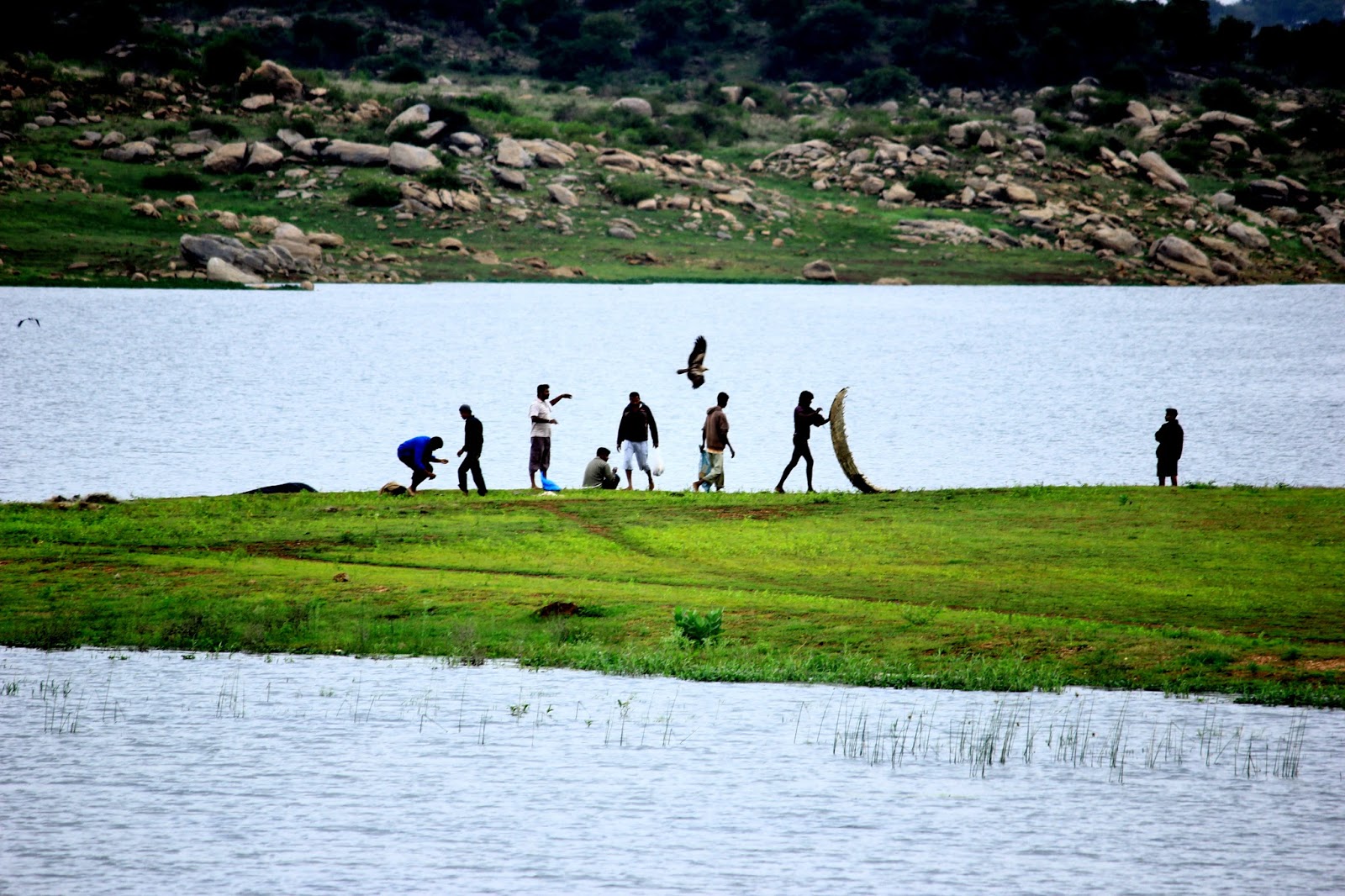 About the Place: The scenic Thippagondana Halli reservoir is about 40 kms. from Bangalore. It is located in Ramanagara district at the confluence of river Arkavathy and Kumudavathy. Route: Bangalore- TG Halli reservoir route map How it all lined up? My friends at the office were planning a trip to some location like Talakad or Mekedatu. The weather in Bangalore had been bad for the past one week. It had been raining everyday. Five of us were ready to go in spite of the bad weather. Things went haywire when one of our friends pulled out of the trip due to viral fever. One by one, the remaining people started pulling out. Finally we decided to cancel the trip. I  was browsing the net when I came across this place called TG Halli reservoir. This seemed to be an interesting location that had not been explored much. Also this location was not too far from Bangalore, so we could return soon if the weathe
Read more

Sud
I am Sud. Welcome to my travel blog. I love travelling and many times I find myself in a situation where I feel that it would have been good to have more information about the place I am visiting. I write this blog to share my travel experience with other fellow travelers. I would be glad if my travel blog helps you in planning a trip to your destination. If you have questions or would like to get in touch with me, you could contact me on the below email address. Email: Sudarshan.c.mondal@gmail.com